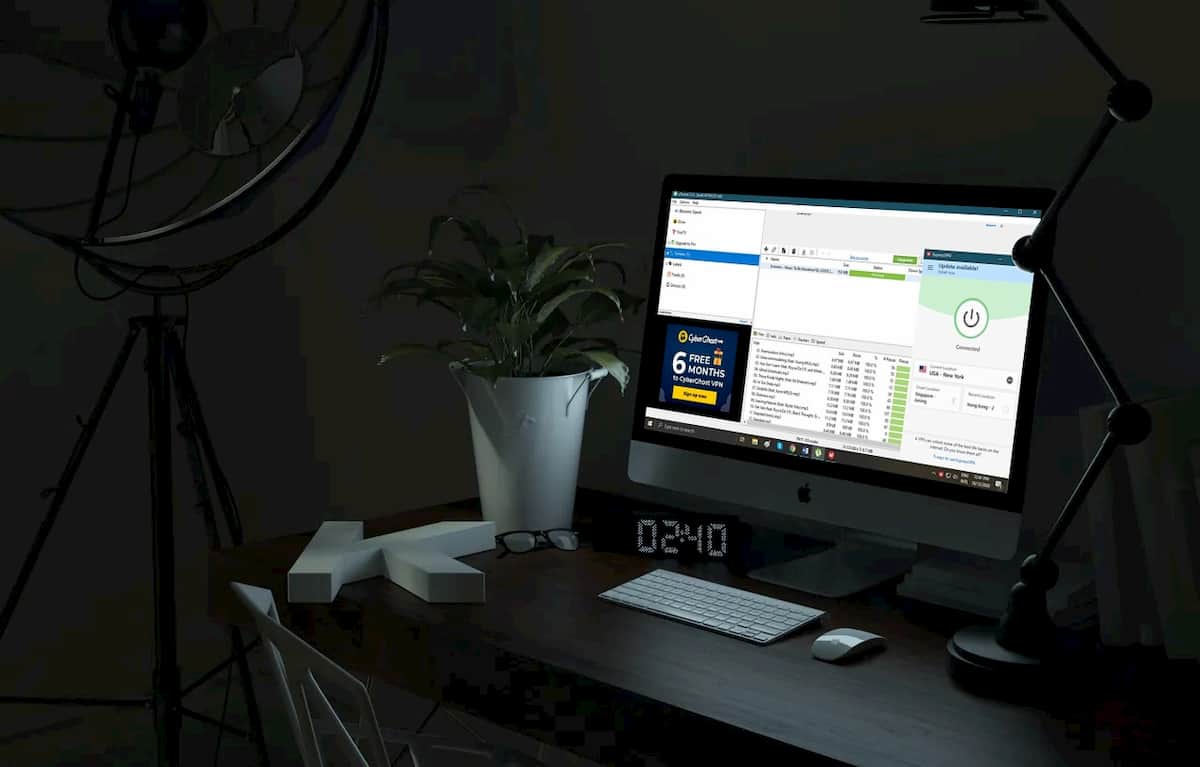 The Legalities of Torrenting: Is It A Crime?

Torrenting involves a file sharing process and is not intrinsically illegal. It varies depending on the type of files you download and whether they are subject to copyright. For instance, If you download a pirated book, movie, show, or game, you will be breaching the law.

On the other hand, if you download a torrent file that is not subject to copyright, you don’t have to worry about any legal implications. To be completely unbiased, though, a considerable majority of people who indulge in p2p/file sharing download copyrighted material.

This especially goes true for cord-cutters and binge-watchers, who don’t have subscriptions to prominent streaming platforms in the marketplace. As soon as a new movie/TV show gets released, it magically makes its way on torrenting sites like ThePirateBay, KickAssTorrents, and YIFY.

It is claimed that 80% of piracy is accredited towards streaming, which is mostly done through torrenting. Illegally downloading files via torrenting allows users access to unauthorized VoDs on the internet, resulting in losses exceeding $30 billion in the US alone. That’s quite a huge hit, to say the least!

This is why copyright infringement hunters have ramped up their efforts to block numerous torrenting sites and pass laws that allow ISPs to instantly display a “warning” if you are caught downloading pirated content. So, if you want to remain anonymous, you can indulge in safe torrenting with ExpressVPN. 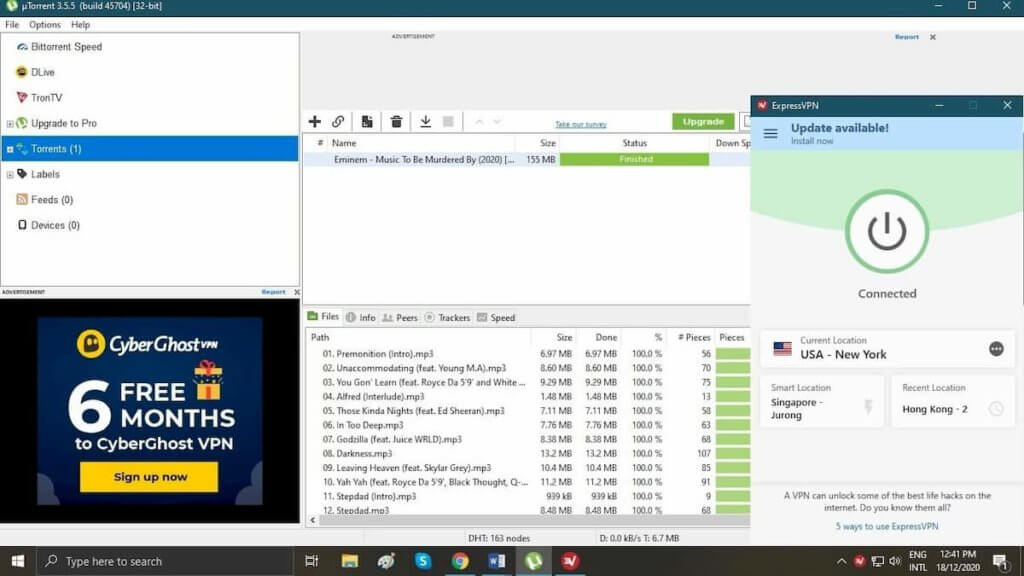 Torrenting is a decentralized P2P file sharing process. A large file is broken into small pieces and moved from uploaders to downloaders through a torrent client. The process involves simple three steps;

There are hundreds of torrenting sites available on the internet that even have mirror versions, as to remain functional, if any website gets blocked. Usually, people use sites like ThePirateBay, KickAssTorrents, RARBG, 1337x, and Torrentz2 for downloading torrent files or magnet links.

Software like BitTorrent and uTorrent load torrent files and then allow users to download them easily. To speed up downloads, users may even add SOCKS5 proxies or update the trackers list for each torrent, which are available on numerous sites online.

Torrenting software also gives users the ability to select the files they want to download from each torrent. Depending on your searches on torrenting sites, you may also find a huge list of torrent files with varied statistics of seeders and leechers. 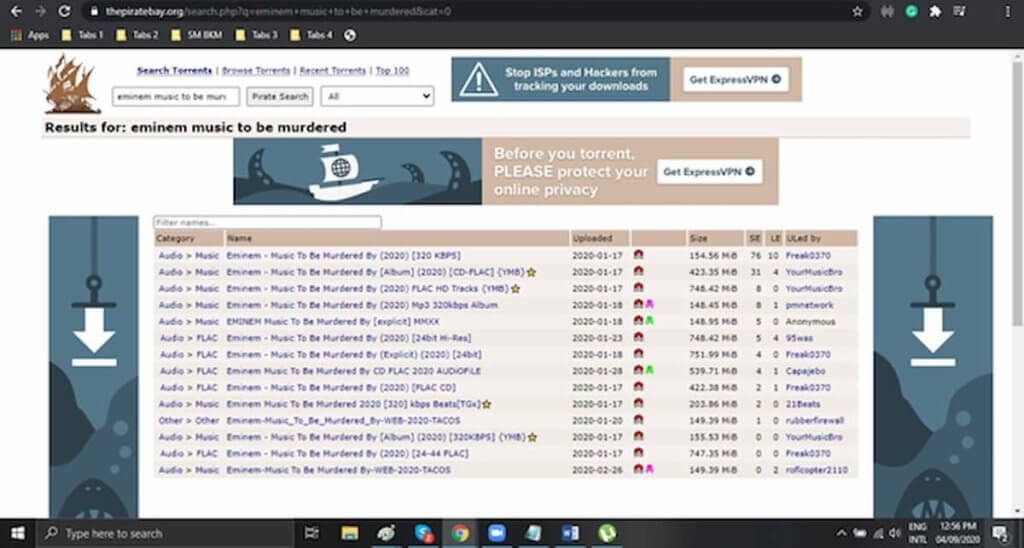 Cyber laws against torrenting vary from country to country. You might get legal notice, charges, or deferral of your ISP’s license. Some countries’ law enforcement agencies think it is legitimate to torrent because downloading content cannot be offensive.

On the other hand, developed countries have more strict laws than the rest of the world.  If you are found guilty in the US for illegal torrenting up to 10 times within six months, you can be charged with five years of jail. An estimated 1.5 million warnings are issued each year for such activities.

The UK has its digital economy act where legal notices are sent to the persons involved in illegal torrenting. Italy, New Zealand, and France also issue warnings, leading to fines and imprisonment. However, as mentioned before, this varies on the type of files you download.

So, the answer is torrenting is not illegal. Watching content is not an offense, but only the detrimental distribution of copyright material is a criminal activity. It can create a scenario where you can get caught by the authorities and fined in thousands!

What is Safe Torrenting?

If you want to download torrents safely and securely, you will have to invest in a VPN solution (and try to get the best vpn for torrenting you possibly can). Virtual Private Networks keep you anonymous when you torrent by masking your IP address. They also protect you from hacking attacks, web threats, and viruses.

Generally, when you torrent, the downloading speed drops down. Some VPNs support torrenting with uninterrupted high-speed downloads. The only thing to remember here is that not every VPN helps you in this manner. You have to be selective in the decision-making process!

Torrenting itself is not illegal, except for the access and distribution of copyright content. Of course, P2P/File sharing needs to be regulated worldwide in a symmetric manner where the general law protects copyrights, but if you still want to take the risk, getting a VPN is the best solution!