Contact our office for a no-charge confidential consultation to discuss your potential legal options. We have broad experience in divorce/family legal matters. When you talk with us, you know we’ll apply that experience and knowledge to your problem.

Russell Knight and his staff have extensive trial experience and are eager to take matters to hearing in front of a judge when required. While informed, aggressive negotiation is an important strategy, your lawyer should be comfortable advocating for you in open court.

Russell Knight and all his staff are fluent in Spanish. We can speak with you in person, on the phone or via written correspondence in your native language. Russell Knight y todo su personal habla español. Podemos hablar con usted en persona, por teléfono o a través de correspondencia escrita en su idioma natal.

Russell Knight was born in Prince Albert, Saskatchewan, Canada.  His family moved to the United States in 1991.

Russell Knight attended Bradley University in Peoria, Illinois and graduated in 2000 with a Bachelor of Science in Business Computers Systems.

After two years working as a computer programmer for a Fortune 50 company, Russell Knight decided that he’d rather work with people than machines and he enrolled in the University of Illinois College of Law in Urbana, Illinois.

Upon graduating from the University of Illinois College of Law in 2006, Russell Knight began working for a small general practice law firm in Chicago, Illinois.  The majority of the clientele at this law firm were Spanish speaking so Russell spent his free time during this period learning Spanish.

In 2009, Russell resigned from the small law firm and moved to Mexico to perfect his spoken Spanish.  A few months later, Russell Knight returned to Chicago, Illinois to open up The Law Office of Russell D. Knight.

While Russell Knight always focused on family law, The Law Offices of Russell D. Knight began exclusively practicing family law in 2013.  Russell Knight much prefers to do one thing, Family Law, and do it well. Russell Knight still, however, uses a great deal of his general knowledge of Criminal, Immigration and Bankruptcy Law in his Family Law practice.

Russell Knight has been working with attorney Rahul Iyer since 2015.  A partnership or an associate position is too restrictive for either Russell or Rahul. Therefore, they co-counsel almost all their cases while sharing in expenses. Russell and Rahul are both originally from Canada and enjoy each other’s dry Canadian humor (or as we spell it, “humour”).

Free Consultation Contact our office for a no-charge confidential consultation to discuss your potential legal options. We have broad experience in divorce/family legal matters. When you talk with us, you know we’ll apply that experience and knowledge to your problem. Russell D. Knight (773) 334-6311 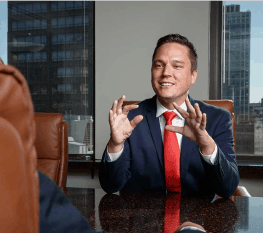